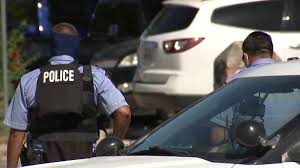 MCALLEN, Texas  — Two police officers were shot and killed Saturday by a suspect who later fatally shot himself in a South Texas border town after responding to a domestic disturbance call, authorities said.

McAllen Police Chief Victor Rodriguez identified the slain officers as Edelmiro Garza, 45, and Ismael Chavez, 39. Garza was an officer with the police department for more than eight years while Chavez had over two years of experience.

“We have lost two brave public servants who sought only to keep peace in our City,” Rodriguez, visibly distraught, told The (McAllen) Monitor.

The officers first met with two people who reported assaults that took place inside a nearby home on the south side of McAllen around 3:30 p.m. Saturday, Rodriguez said. But the alleged shooter, whom police identified as 23-year-old Audon Ignacio Camarillo, opened fire when officers attempted to enter the home.

“They were doing their job. That is what they were supposed to do. The person was a suspect of the incident, met our officers at the door, and shot at both officers,” Rodriguez said. “Both officers suffered fatal wounds, they have both passed away as a result. The officers never had a chance to suspect deadly assault on them, much less death.”

Camarillo shot and killed himself shortly after opening fire on the officers, Rodriguez said, adding that the suspect hid behind a vehicle after other officers responded to the scene. Camarillo had a few run-ins with police beginning in 2016 to his most recent arrest last month on assault charges, according to public records.

More details surrounding the domestic disturbance Garza and Chavez responded to were not immediately known. Rodriguez said the attack happened suddenly and fellow police officers didn’t learn of the officers’ deaths until arriving to the area moments later.

Rodriguez said he doesn’t expect his department to get over the deaths of their fellow officers anytime soon.

Texas Gov. Greg Abbott, who spoke with Rodriguez, offered the full backing of the state and expressed his support via social media.

“Two of our finest were killed in the line of duty while working to protect residents in their community,” Abbott wrote on Twitter. “We unite to #BackTheBlue.”

Lt. Christopher Olivarez, spokesman for the Texas Department of Public Safety, said DPS was among the agencies assisting McAllen police on Saturday.

Olivarez noted that DPS sent troopers to secure the scene after the McAllen Police Department requested their assistance. He said his agency received a call about the incident around 4:30 p.m.

McAllen is located at the southern tip of Texas, about 70 miles (113 kilometers) west of the Gulf of Mexico.

Texas Attorney General Ken Paxton tweeted that his office will provide the McAllen Police Department with any help needed.

“Our prayers and full support are with the valiant men and women of the #CityofMcAllen PD this evening,” the tweet read. “We are grateful for police in McAllen and around this great state.”

U.S. Rep. Vicente Gonzalez of McAllen said in a statement that receiving news of the two officers’ deaths was “devastating.”

“This is devastating news to our community. My heart breaks for these fallen officers and their families,” Gonzalez said. “They served McAllen bravely and honorably and I will keep them in my prayers.”

Rodriguez said that while the police are “weakened for the moment,” he expects a resilient law enforcement community to stand tall and persevere through it.

“The strength and the resolve we have to serve our communities, all of us here, will allow us to do what we do every day,” Rodriguez said.

Law enforcement from several cities in Hidalgo County gathered Saturday evening at McAllen Medical to honor Garza and Chavez. More than 50 police cars were part of a procession that accompanied the bodies of the officers, who were taken to Hidalgo County pathology for an autopsy.