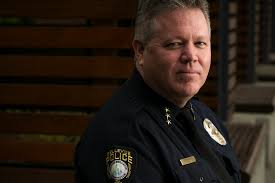 BELLEVUE, Neb.  – Kenneth Clary will be the new chief of the Bellevue Police Department, taking the helm in September.

Clary replaces interim chief Tom Dargy, who took on the role in January after the December retirement of Mark Elbert. The former chief had been on paid administrative leave for about a year after allegations by the police union that Elbert was deceptive and dishonest.

According to a release from the department, Clary was selected by city administrator Jim Ristow from 20 candidates following “an extensive interview process” overseen by the Bellevue Civil Service Commission. Dargy was not among the candidates as he chose not to apply for the position, the release states.

Clary has 25 years of experience with the Iowa State Patrol, where he served in various leadership positions, his most recent assignment as an area commander. He received his master’s degree in public administration from Upper Iowa University and current a doctoral candidate in criminology and criminal justice at the University of Nebraska – Omaha.

He has served the community as a Special Olympics torch run volunteer for several years, the release states.

“Chief Clary will prove to be a valuable asset to Bellevue as he brings a great deal of experience in law enforcement and community service to the city,” Ristow said. “As someone who values trust and accountability, he will do a great job with moving the department forward. I welcome him to Bellevue, and I look forward to the opportunity for the dedicated members of the Bellevue Police Department and the Bellevue community to get to know him and work with him.”