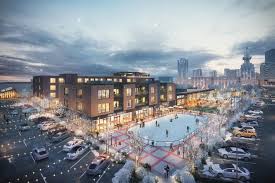 A public ice skating rink, family fun center, third Big Grove Brewery location and outdoor gathering area — those are just some of the attractions that could be coming to First and First West in downtown Cedar Rapids.

During a virtual Cedar Rapids City Council meeting on Tuesday, councilmembers approved a resolution that authorizes City Manager Jeff Pomeranz and his staff to pursue a project term sheet with 1st and 1st LLC to determine a timeline, project terms and financial incentives for the development.

The eight acres of land have been unused since the 2008 flood. For years, the city of Cedar Rapids envisioned a casino, but those plans were rejected in 2014 and again in 2017. So, the city went back to the drawing board.

An open house was held for residents to share their ideas last November, and the Cedar Rapids City Council initiated a request for proposals a month later. The city was looking for a destination development that created new attractions while also complementing existing amenities. The city said it wanted a public gathering space that created a “sense of place” through its architectural design.

The city received two proposals in late February: one from Indianapolis-based Flaherty & Collins Properties and the other from local development group 1st and 1st LLC. Flaherty & Collins submitted the only proposal back in 2018 for the site, but it was focused on upscale housing and the city rejected it as not meeting the site’s needs.

Flaherty & Collins came back with a new proposal earlier this year that included residential units, parking, a public plaza and a heated saltwater pool, among other features. The cost was estimated at $63.2 million.

A team of local developers under the name 1st and 1st LLC submitted the second proposal named “Kingston Landing.” The development is slated to have a Big Grove Brewery, a 12-to-14-screen movie theater, a public ice skating rink, residential units and a family fun center, among other features. The estimated cost is $90 to $100 million.

A steering committee reviewed the two proposals in early June and recommended the city council pursue the proposal submitted by 1st and 1st LLC, which is led by Joe Ahmann and Chad Pelley from Ahmann Companies, Matt Swift of Big Grove Brewery and former Hawkeye and NFL player Nate Kaeding.

“Over the last several months with COVID and the pandemic, a lot of things have happened that none of us could have foreseen, and our team has been meeting multiple times with the anticipation if we would be successful in moving forward with our project,” Ahmann said during the public comment period of the June 23 meeting.

Councilmember Scott Olson said he’s gotten comments from constituents about making the residential units affordable and not just high-end. Councilmembers Ann Poe and Patrick Loeffler both brought up the importance of sustainability.Councilmembers expressed enthusiasm for the project and what’s to come, while also bringing up some things they want to see addressed as the process continues.

“I want to put amenities and attractions that have some form of sustainability,” Poe said. “I think it’s extremely important that we don’t just build this for the next 10 years. … I’m looking long-term, I’m looking at 50 years down the road. How is it going to hold up?”

Olson said he’s excited to have a local team of developers working on the project and that the project will have a “tremendous view from I-380” as people are driving through the city.

“This is a signature project for the future, that’s gonna have an impact on this great city of Cedar Rapids for decades, if not longer than that, I hope,” Olson said. “It’s very exciting. It’s timely, and I think this will reinfuse the vigor of our downtown area that brings more people down here.”