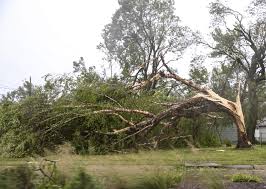 Neighborhoods all over Linn County and Eastern Iowa for that matter, will look much different once cleanup is completed in the coming weeks. Gone will be the shade provided by so many of the large trees that now litter the ground. Trees filter pollution and provide shelter for birds and other animals. According to the Cedar Rapids Gazette, half of the tree canopy in Cedar Rapids is gone after last Monday’s derecho.

Todd Fagan, the Cedar Rapids city arborist, told the Gazette that half the canopy is gone. He valued the city’s tree population at somewhere near $112 million. He noted that the city will document and note every tree that fell due to the storm, and figure out ways to replant as many trees as possible. Marion arborist Mike Cimprich confirmed to the Gazette that the city of Marion lost half of it’s tree canopy as well. Drive by what was Marion Square Park, and you’ll see what he means.

Older neighborhoods like the one I live in will never look or feel the same. I had shade trees all around me. They’re are all gone. My backyard was completely shaded. Now it will roast in the summer sun with no protection. We’re picking out shades for portions of our house that never needed them. The sun will now beat inside our house like never before. The trees that protected us for so long are now lying on the ground.

But new trees will be planted. The Gazette reports that Tax Actof Cedar Rapids has pledged $100,000 to go towards tree replanting in the area. More donations are likely to follow. Future generations will enjoy their efforts.