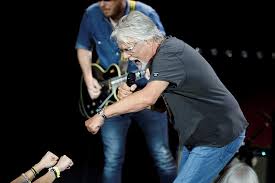 It was 44 years ago today REO Speedwagon took the stage at the Paramount theater in downtown Cedar Rapids.

The opening act was from Detroit Michigan, Bob Seger and the Silver Bullet Band.

Both bands were still relatively unknown on the national scale, but were rapidly making fans across the Midwest. On that night their fans in Cedar Rapids would see two superstar acts on the brink of stardom.

REO had already released five albums by this point, and the band’s sixth album (featuring the track “Keep Pushin”) would be issued just one month later in June, giving the band its highest charting single to date.

Just a week earlier on May 6, Bob had celebrated his 31st birthday. Eight months before this Cedar Rapids date, Bob Seger had sold out 24,000 seats over two nights at Detroit’s famous Cobo Arena. The recordings of those two shows were captured on his breakthrough album “Live Bullet”, that had just been released a month earlier on April 12, 1976.

But on the night of May 14 at the Paramount Theatre, Bob and the band were just the opening act, according to theconcertdatabase.com. It would be the only time that Bob would play on a major stage in Cedar Rapids.

Tickets were $5.50 and according to the Concert Database, they were sold at the Britchery, the Footnote Bookstore, Record Realm and at Positivity Main Street.

Less than a year later, the career trajectory of both bands would skyrocket and fortunes would follow. REO would crush it with their hit “Time for Me to Fly” and Seger would release “Night Moves”

Neither band would have found it necessary to play small theaters after that. REO and Seger filled arenas and stadiums with multiple dates and sold-out shows in big cities across the USA, Canada and Europe.

Radio airplay for both bands would come easy for the next few years with hit after hit climbing the charts, Both Seger and REO would continued to tour up until 2019. It was a moment in time that you may have experienced yourself. Discovering a new band or artist in their early days and following them as their careers exploded.

Last year, Bob Seger concluded what he said would be his final concert tour. Considering how coronavirus may impact the concert scene for years to come, it is uncertain if REO Speedwagon will ever go back out on the road again.

But on May 14, 1976 the city of Cedar Rapids welcomed both bands in their ongoing journey to stardom. Were you there from the start? Tell us about in the comments!