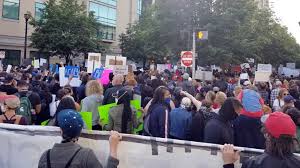 Hundreds of peaceful protesters took to the street in Cedar Rapids on Saturday afternoon in a show of solidarity to demonstrate against another incident of police brutality that resulted in the death of George Floyd last Monday, May 25 in Minneapolis.

The daytime rally was attended by men and women with a diverse range of ages, colors and backgrounds. People from all walks came together, including some that used the opportunity to encourage voter registration. They set up tables with voter registration forms, and information that explained to those interested how voting is ultimately the most powerful and truly democratic tool of reform in the U.S.

A heavy presence of Cedar Rapids Police in the area of the rally at 1st Ave and 15th  St. NE brought out the best of our city with citizens and cops showing restraint and mutual respect for one another.

But all those attending the peaceful rally were well aware of how fast those things can change, seeing it play out in communities across America from Chicago, Atlanta and  Detroit, to Los Angeles, Boston and Miami. Looters vandalized property, overturned cars set aflame, buildings destroyed, especially at the epicenter of protest in Minneapolis.

Earlier on Saturday, the Department of Justice’s William Barr said on national television that he believed many riots had been instigated by outside agitators coming into the cities with the intent of causing disruption, and not just simply angry residents and others just out looking for trouble.

Which is why Cedar Rapids deserves to be recognized in the national spotlight – and so does every city whose citizens are able to “keep it together” to allow peaceful and meaningful protest, free of violence and fear. Including Minneapolis.

Because what’s missing from the headlines is the fact there are many peaceful protests occurring every day just like the one Saturday in Cedar Rapids.

And if you know anything about Eastern Iowans, you know that there is a lot of regional pride we share in the Midwest with neighbors like Minnesota.

And we’ve already seen the best of the Twin Cities in action as volunteers come out by day to clean up after the night time rioters have dispersed. That’s more than just Minnesota nice. That’s Minnesota pride.
Related Topics:
Up Next