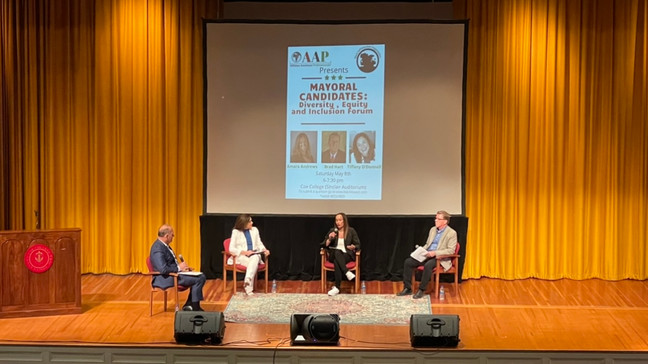 For the first time since announcing their campaigns, Mayor Brad Hart, Tiffany O’Donnell and Amara Andrews joined at a community event.

Hosted by the African American Professionals of Iowa, the community had the chance to ask the candidates about their perspective on diversity, equity, and inclusion. Many of the questions received were on the verdict of the George Floyd case and each candidate’s stance.

“A lot of the questions was wondering how do they feel about diversity- equity and inclusion- how do they plan to implement it and track it,” said president of African American Professionals, Brandon Jackson.

For candidate Amara Andrews, she said derecho recovery signifies a lack of equity between each neighborhood.

“You can go downtown and look around and you don’t see evidence of derecho. But if you go a mile in either direction and you can see there’s still trees there’s still houses that haven’t been repaired,” said Andrews.

Mayor Brad Hart said he is proud of the city’s recovery so far, and part of that is because of the help from the nine neighborhood associations. He said an active association keep crime down. The city works directly with them to find what is needed for each neighborhood.

“For every one of those neighborhood associations, the city has a liaison someone who goes and meets with them regularly, shares information for what’s going on with the city, takes information back to the city,” said Mayor Hart.

The city posted the position for a diversity, equity, and inclusion officer nine months ago. Candidate Tiffany O’Donnell said she encourages the city to fill that position and increasing the amount of minority leaders.

Mayor Hart said diversity within leadership has increased since he stepped into the position in 2017. Andrews said to continue to see that increase, the city needs to focus on education in Cedar Rapids’ young adults.

“Investing in organizations to ensure that our young diverse talent is getting the resources that they need and that they feel that Cedar Rapids is a place they want to come back to and help lead,” said Andrews.

O’Donnell said growing that diversity will grow the community.

“It’s like that famous Field of Dreams quote, ‘If you build it, they will come.’ I believe if we have an inclusive and diverse community, it will come,” said O’Donnell.

The African American Professionals of Iowa said they plan to host similar events in the future so voters will know the impact those on the ballot plan to make on the issues that mean the most to them.