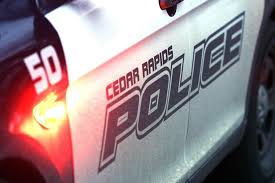 Around 11:40 a.m. officers were sent to the 1500 block of Hamilton St. SW for a disturbance. Callers reported hearing a loud bang and seeing several individuals run from the scene.

Witnesses indicated an individual in possession of a firearm ran inside a residence in the 100 block of 15th Ave. SW.  They also indicated the individual fired several rounds in the alley between 1st Street and Hamilton Street SW.

Police officers secured the area around the home where the suspect and others had entered. Officers also located several shell casings in the alleyway, as well as damage to a garage and vehicle as the result of the gunfire.

Officers made contact with a resident of the home that the shooter and others had entered and were able to get the individuals to exit the home.

The shooting suspect was identified as D’Montrey Rayshawn Redmond, 23.  Redmond was arrested for Felon in Possession of a Firearm, Reckless Use of a Firearm with Property Damage, and Carrying a Concealed Weapon.

Officers located a handgun in the basement of the residence in which the individuals attempted to hide.  No injuries were reported.