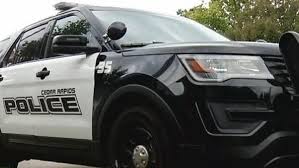 Lucas Jones, a sergeant in the patrol division of the Cedar Rapids Police Department, has been fired for violating departmental rules and policies, CRPD announced on Thursday.

“Fire Lucas Jones” has been a frequent chant at recent protests calling for police reform in Cedar Rapids, but the official statement regarding Jones’ firing doesn’t mention the protests or the reasons protesters wanted him fired.

In 2016, Jones shot Jerime “Danky” Mitchell during a traffic stop in Cedar Rapids near Coe College. What occurred during the traffic stop is still in dispute, but it resulted in Jones firing his gun three times. Mitchell, who was unarmed, was struck in the neck. The injury left Mitchell permanently paralyzed.

A grand jury declined to indict Jones for the shooting, and an investigation by the Iowa Department of Criminal Investigation concluded that Jones had not broken the law when he shot Mitchell. He was reinstated, after being temporarily suspended while the case was under investigation.

Mitchell and his wife, Bracken, filed a lawsuit in March 2017 against Jones and the city of Cedar Rapids. The couple is suing for negligence; reckless, willful and wanton behavior; assault and battery; intentional infliction of emotional distress and loss of consortium (a term for the right of a spouse or family member of a victim to file suit in a personal injury case). The trial is scheduled for October.

“Justice for Danky” signs have been prominent at the Cedar Rapids protests, and Mitchell spoke during the June 6 protest in Greene Square Park. He told the crowd he hadn’t planned to come, but said hearing and seeing all the people gathering in the park to peacefully demand reform gave him strength.

The incident with Mitchell was not the first shooting Jones was involved in as a CRPD officer. In October 2015, Jones and another officer shot and killed 21-year-old Jonathan Gossman after a traffic stop. That shooting was deemed justified by Linn County Attorney Jerry Vander Sanden.

According to a statement issued by CRPD, Jones had been on administrative leave since May 4, due to a departmental investigation that began in February. The statement did not provide any details about the investigation or the reason Jones was fired.

“Additional details are not available as this is a personnel matter,” the statement said.