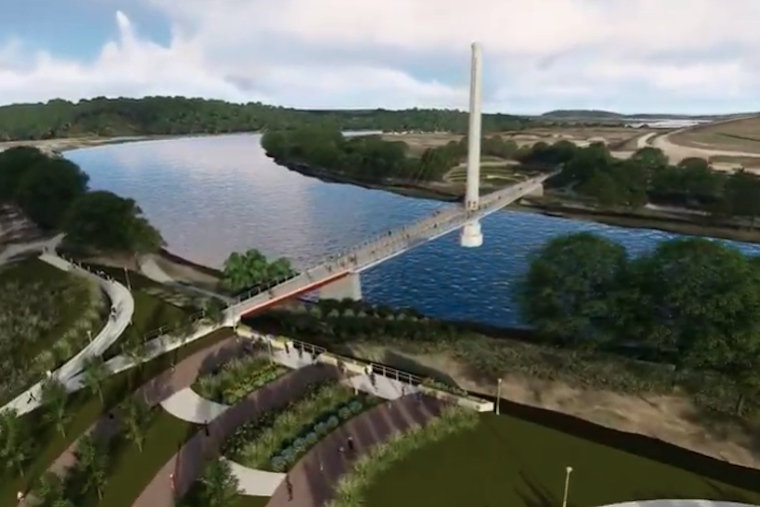 ConnectCR, the community group working to bring new recreational opportunities to Cedar Rapids by revitalizing Cedar Lake and constructing a pedestrian bridge across the Cedar River, announced on Thursday it had surpassed it fundraising goal of $7 million.

“I have been a big supporter of this project, and it’s just really exciting to see how far the ConnectCR team and the city team have brought the project,” Mayor Brad Hart said at a press conference on Thursday.

“It’s really gonna happen now, and that’s incredibly good news,” Hart said, adding that the project is an “amazing example” of how residents can have a big impact on the community.

The cost for the group’s project is estimated at $20 million. ConnectCR has raised nearly $7.2 million. Both the City of Cedar Rapids and the Hall-Perrine Foundation each contributed $5 million. This leaves a gap of about $2.8 million that the group hopes to meet with grants, Mike McGrath of ConnectCR said at the press conference.

“This is the first capital campaign, I think, I know, that’s ever been completed in the middle of a pandemic, and that that’s an interesting fact that’ll go in the history books,” said Councilmember Dale Todd, who has long supported the initiative.

ConnectCR’s plans for Cedar Lake are focused on transforming the lake into a recreation destination with walking trails, fishing and paddle sports. There are also plans for a boardwalk to extend over the lake and a nature-based playground area.

The group’s other goal is the construction of the Smokestack pedestrian bridge, which will connect trails on both sides of the Cedar River and transform a washed out railroad bridge that was destroyed in the 2008 flood into a new attraction. The new bridge will feature a support that’s a replica of the Sinclair smokestack, which was an iconic part of the Cedar Rapids cityscape for a century, but was torn down after its long-shuttered plant burned down in 2009.

The Cedar Rapids City Council approved a $1.3 contract in February with Canadian-based firm WSP USA to provide technical designs and engineering for the two attractions.

“The project will add to the quality of life in our community and attract new visitors to our community, and I know as people start to use some of the amenities, they’re just going to be more and more excited for the project to be completed,” Hart said.

The entire project is scheduled to be finished by 2025, but residents can expect to see changes within the next three years as work on the fishing piers, kayak ramps and playground begins.

Man drowns after going for swim while fishing in Linn County