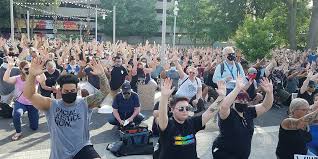 Leslie Neely, Tamara Marcus and Nicole LeGrand organized last Saturday’s protest in Cedar Rapids, which more than 2,000 people attended. The women didn’t expect to be in this position — organizing another protest for this upcoming Saturday, meeting with city leaders to discuss reforms, fielding questions from reporters — but they are ready to see change in Cedar Rapids.

“We didn’t expect it, but we are so thankful, and it has been truly beautiful watching the community come together on so many different levels,” LeGrand said.

“I wasn’t expecting Cedar Rapids to show up the way it did, and I think just seeing how they responded to this movement gives me hope that we can make lasting change not only for police reform but many other issues that need to be addressed,” Marcus said.

During his remarks, Jerman said the Cedar Rapids Police Department has begun to strengthen the policies involving use of force. The change will require officers to intervene when they witness a use of force that is unnecessary or unlawful.

“This change in our policy is just a start and I am committing to continue to have these conversations to enhance change so we never have another senseless loss of life such as the murder of George Floyd,” the chief said.

Jerman said he is embracing the call for change and will engage in conversation with “anyone that will help bring about this change.” Hart also said that the Cedar Rapids City Council is listening and will work to make the necessary changes.

Neely, along with Cedar Rapids resident Jorel Robinson, listed seven specific demands they and other organizers want city officials to implement and address.