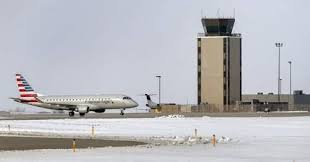 With everything going on in the world right now, traveling is not a priority for any of us at the moment. That’s why this news will not come as a surprise as you read it.

According to CBS2, “An Eastern Iowa Airport spokesperson said passenger traffic has diminished during the COVID-19 pandemic.”

Diminished is an understatement when you look at the numbers. Comparing last April to this April, the airport is down 97%. When you think about it, that’s pretty crazy. Who would have ever thought that the airport would look like a ghost town on a daily basis?

My friend Jerry was at CID earlier this afternoon. He told me,”It’s so weird, I only saw like one person and he was a security guard. I didn’t see one passenger!”

The CBS2 story said that only 1,500 people boarded a plane in the month of April. A spokesperson for the airport said that right now the staff’s focus is for the safety of those who do choose to fly.

I have parents the live in Arizona and a brother in Las Vegas. I would love to get on a plane and see them, but I think I’ll wait for a month or so. I’m not afraid to fly, but I feel sticking around Iowa is the right thing to do at the moment.

What about you? Would you get on an airplane right now and take a trip?

Comment below and we will discuss your answers later this week.