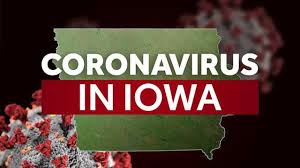 Linn County will not be receiving additional COVID-19 vaccines from the state despite the Iowa Department of Public Health expanding the number of individuals who will become eligible to be vaccinated.

The Iowa Department of Health announced on Thursday that adults under 65 who have a condition the CDC recognizes as putting them at higher risk of developing severe illness due to COVID-19 will become eligible to be vaccinated starting Monday. The CDC has a list of the various conditions that qualify.

“While our eligible population will be expanding, we will not be getting an additional vaccine allocated to us each week at this time,” Meador said, adding that the county receives about 3,600 doses per week. “Additionally, we do not expect to receive any additional Johnson & Johnson vaccine until late March. We do not know when we will see an increase in vaccine doses allocated to Linn County.”

Next week’s appointments will remain dedicated to individuals 65 and older and the Phase 1B tier populations, Meador said during a news conference Friday afternoon. The week of March 15 is when the county’s vaccine allocation will include the expanded groups.

County public health departments, including Linn County, did not get advanced notice about the expanded vaccination program. The change happened at the state level, and LCPH had not anticipated for the change to occur until later in the vaccine roll out, Meador said. KCRG reported that county health departments received notice eight minutes before the announcement was made.

“There was a pretty robust sentiment that our county partners were not happy about finding out this information as late as they did because they were not able to plan either,” Meador said about a call on Friday between IDPH and county health departments. “Many of our counties still have a lot of people that are 65 and older or within that Phase 1B tier one group that had not been vaccinated yet, so there was frustration expressed on that call due to that.”

Because there are many individuals who qualify for a vaccine under Phase 1B, the phase has been split into five tiers. Linn County is in the process of completing the first tier of Phase 1B this week.

“We really need to group together, go through all this information, so that we can make this as fair and equitable as we can for our community members,” Meador said, adding that the percentage of Linn County’s population who will be eligible under the new guidelines is going to be “significant.”LCPH will be working on plans over the weekend to determine how to move forward following the expanded eligibility announcement, Meador said. Additional information is expected to be released on Monday.

Mar. 7: Iowa reports over 263,000 residents have completed their vaccine series