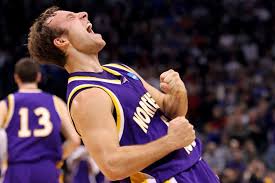 IOWA — It’s the most definitive “One Shining Moment” in program history – and during a year where COVID-19 concerns forced the cancellation of March Madness, there’s no better time for its ten-year anniversary.

It was March 20, 2010 when Northern Iowa senior guard (and Iowa City West grad) Ali Farokhmanesh cemented his place in college basketball history with his iconic three-point shot against the University of Kansas – the top seed in that year’s NCAA Tournament. The transition bucket were the final three Farokhmanesh’s 16 points in the game – helping the Panthers shock the Jayhawks with a 69-67 win in the Round of 32.

CBS Sports basketball analyst Dan Bonner’s exclamation of “You can’t be serious with that shot!” also lives on in March Madness memory. The win gave UNI the program’s only Sweet 16 appearance, where the Panthers’ run ended with a loss to Michigan State.