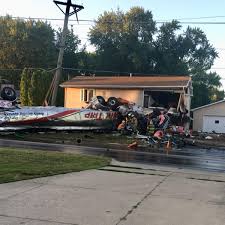 WATERLOO, Iowa  – Waterloo officials say a man escaped injury when a fuel tanker slammed into the home where he was sleeping.

Authorities said the tanker truck hit a Waterloo home early Thursday after first being involved in a crash not far from the house.

Firefighters evacuated part of the neighborhood and a hazmat team was called to help with the fuel spill. The truck driver was taken to a hospital after being extricated from the truck.

Officials say the truck driver apparently lost control after hitting a minivan and struck two parked SUVs in the home’s driveway before slamming into the house.

Further details were not immediately available.

Kanye West to appear on Iowa ballot as candidate for president