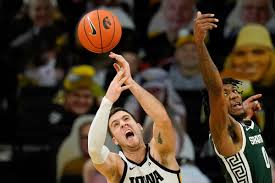 Garza, who came into the game as the nation’s leading scorer at 26.4 points per game, became the second 2,000-point scorer in program history. Garza, who has 2,009 points, is 107 points behind all-time leading scorer Roy Marble.

It was the fourth consecutive loss for the Spartans. Iowa snapped a five-game losing streak to Michigan State, which came in having won 19 of the last 22 in the series.

Nunge finished with 12 points. Joe Toussaint had 10. The Hawkeyes had 39 bench points.

Iowa guard CJ Fredrick, who missed Friday’s game at Illinois because of a lower leg injury, started and played 12 minutes, scoring two points. Fredrick has started all 16 games he has played in this season.

Michigan State, which went 20 days without a game because of COVID-19 issues within the program, was playing its third game in six days, all on the road. This was the first game in a three-game, six-day stretch for Iowa.

Iowa: At home against No. 7 Ohio State on Thursday.

Michigan State: At home against Nebraska on Saturday.

Hawkeyes vs. Huskers moved back to Black Friday for 2021

No. 16 UNI wrestlers fall short against No. 5 Oklahoma State