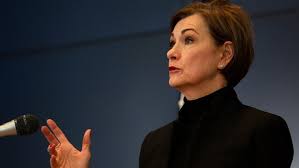 Abortion providers with the help of the American Civil Liberties Union of Iowa are suing Iowa Gov. Kim Reynolds for suspending abortion procedures as part of her order to halt elective and non-emergency medical procedures.

Reynolds, an abortion opponent, says the move was not based on her personal ideology but a broad order to conserve medical equipment like ventilators and surgical masks.

The lawsuit filed in state court says abortions will be delayed and in some cases denied, forcing women to carry pregnancies to term, resulting in a deprivation of their fundamental right to determine whether to have a child.

Iowa officials: Arrest made in shooting death of Mapleton teen