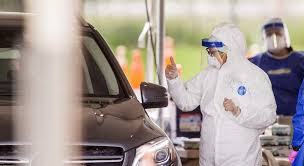 Iowa reported 466 new COVID-19 cases Monday, according to data from the Iowa Department of Public Health, bringing the total number of people who have tested positive for the virus to 313,280.

Health officials reported 1770 test results during the 24-hour period between 11 a.m. Sunday and 11 a.m. Monday, the reaming 1,304 of which came back negative or inconclusive.

Linn County reported 34 new cases Monday. The county’s seven-day average is 53. To date, 18,072 virus cases have been reported in the county, and 279 people have died.

The number of individuals hospitalized with the virus rose slightly during the 24-hour period, from 382 on Sunday to 383 on Monday according to state public health data.

As of 6 a.m. Sunday, 41,411,550 COVID-19 vaccine doses have been distributed in the United States, according to data from the Center for Disease Control and Prevention. A little more than half of them — 21,848,655 — have been administered.

As of Sunday morning, CDC data shows that 361,475 doses of the COVID-19 vaccine have been distributed in Iowa. Iowa public health data, which was last updated Friday, shows that 177,520 doses have been administered, with 167,961 doses going to Iowa residents. Of those, 124,594 individuals have received the first dose of the vaccine series, and 26,463 have received both doses.

In Linn County, 13,188 doses had been administered to county residents, as of Friday, with 2,315 people having completed the two-shot regimen. Overall, Linn County has administered 13,852 doses of the vaccine.

As of 11 a.m. Monday, 68 long-term care facilities in Iowa were reporting COVID-19 outbreaks, down four from the previous 24-hour period.

According to the state data, 1,843 individuals in long-term care facilities are positive for the virus — a decrease of 77 from the previous 24-hour period.

Since March, 1,860 individuals have died in long-term care facilities.

Woman found dead in Iowa was daughter of Minnesota justice