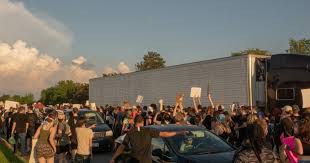 IOWA CITY, Iowa — The Iowa City City Council spoke publicly, Tuesday, about the release of an independent investigation of the June 3, 2020 tear gas incident during a protest.

Council held a work session to discuss the 36 recommendations made by OIR Group, a California-based firm in January.

OIR Group determined that Iowa State Patrol made the call to use tear gas and flash bangs to stop a crowd of around 400 on Dubuque Street from marching onto Interstate 80.

Multiple agencies were involved in the incident, including Iowa City PD, University of Iowa PD and the Johnson County Sheriff’s Office.

OIR conducted interviews with all agencies except for Iowa State Patrol, who repeatedly turned down interviews.

The City of Iowa City released police body camera footage three months later in September. The footage shows police negotiating with protestors on whether to kneel. Ultimately, law enforcement decided not to kneel and told several protestors “they’re not going to pass” before deploying tear gas and flash bangs.

“We think that idea was too quickly disregarded,” said Michael Gennaco, the head of OIR Group.

The next two nights, police let the protestors march on the highway.

“How important was that line in the sand–considering that the freeway did end up getting closed down,” Gennaco told Iowa’s News Now.

“I think certainly the community is welcomed to weigh in,” Iowa City mayor Bruce Teague said during Tuesday’s work session. “I also believe that we should task our chief of police weigh in on this.”

Council agreed to hold future work sessions and events to get public feedback.

“It’s a way to say ‘Hey. We consulted with the public, but we’re not going to actually listen to them. We’re not going to do anything that they want,'” Theisen said. “The report doesn’t reflect the perspective of the protestors.”

Theisen said the city intentionally avoided protest organizers to give feed back to OIR Group.

“What they said is that no one from OIR talked to the protest organizers, which is true. In fact, I reached out to IFR myself to see if they’ve been contacted–and not a single one of them said that they had,” Theisen added.