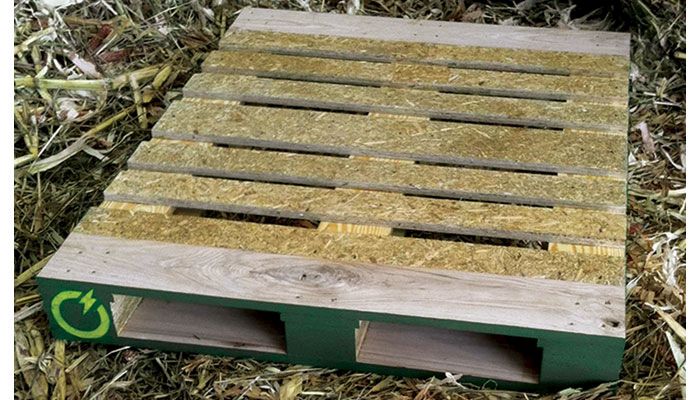 Using corn stover to make environmentally friendly products, a Texas company recently announced plans to build a $15 million plant in northwest Iowa. CornBoard Manufacturing Inc., which makes skis, skateboards and surfboards from corn stover, will make shipping pallets at a facility to be located at Odebolt in Sac County.

The patented material, called CornBoard, can be used to make pallets that weigh less than pallets made from wood but have the same strength as wooden pallets. The company already uses CornBoard to make ski, snow and skateboard equipment marketed with the “Stalk It” brand name, and makes indoor and outdoor furniture from the stover-based material.

It’s not every day that cutting-edge businesses are choosing to build in places like Sac County. CornBoard CEO Lane Segerstrom says he’s excited about the possibilities presented by rural Iowa. He grew up near Ida Grove with a farm background. “This is a great opportunity,” he says. “Going to smaller towns is what we want. It’s a good match.”

Construction of the 50,000-square-foot plant is set to begin in the spring on 40 acres. It will be the company’s first large-scale production plant and is expected to employ 25 to 30 people. Segerstrom hopes it will open for operation sometime in the fall. Located on Highway 175 west of Odebolt, the site already has two stacks of large round-bale cornstalks.

The company scouted locations in several states before deciding to build in Sac County. “We chose this site for two reasons,” Segerstrom says. “It’s in the heart of the Corn Belt and has access to major transportation routes. You have to be where the corn is.”

Some farmers in Iowa will soon have another in-state market for their crop, pallets made from processed cornstalks.

The CornBoard product is an eco-friendly alternative to wood. It is created using a process involving corn stover (leaves, husks, stalks) and a resin. No grain is used, just the stover. The company buys stover from local farmers, and uses the company’s own equipment to assist in baling and hauling.

The production focus of the northwest Iowa plant will be making pallets. Today, millions of trees are cut down each year to produce wooden pallets that often end up in landfills after use. Segerstrom says his company wants to create entirely recyclable pallets that can be returned and repurposed again and again. “Pallets are a good market; they are widely used,” he notes.

The company already makes some building materials with varying density and thickness, all from this product that has no carbon waste. McMahon Associates, an architectural and engineering firm based in Wisconsin, is overseeing construction of the new CornBoard manufacturing facility in northwest Iowa. “We like to be involved with environmentally friendly projects,” McMahon President Paul Benedict says. “It’s exciting to be working with CornBoard.”

The new plant will need 30 to 50 farmers to provide it with about 50,000 bales (50 million pounds) of stover annually. The company expects to pay area farmers a total of as much as $750,000 a year for the corn stover.

The manufacturing process to create the CornBoard material involves stover being sifted, sorted and mixed with a resin, and then bonded under heat and pressure into boards to make the pallets. The company has been working for two years with a group of Sac County farmers to test the feasibility of collecting corn stover for this purpose. “The farmers convinced us we should be in Sac County,” Segerstrom says. “Farmers are interested in having this additional revenue stream, which is a consistent revenue source.”

Using stover instead of trees

The company is looking at building additional plants at other locations in the future to meet the growing demand for eco-friendly pallets. “An increasing number of customers want pallets that don’t cause deforestation and that are sustainable,” he says.

CornBoard’s website says a million acres of U.S. forest are cut down annually to make pallets, which are used once or twice, and then sent to a landfill. The company says its customers can lease the CornBoard pallets and return them to be reused or broken down, recycled and remade into more pallets.

This is an artist’s rendering of what the new CornBoard manufacturing plant will look like when built.

Debi Durham, executive director of the Iowa Economic Development Authority, says the Odebolt plant will be a good fit for Iowa, the nation’s leading corn producer. In recent years, two plants opened in Iowa to make cellulosic ethanol from corn stover, but both have since closed. Poet stopped cellulosic ethanol production at its Emmetsburg plant in July and DuPont stopped production at its plant at Nevada in central Iowa in 2017. DuPont sold its plant to a German company, which plans to produce renewable natural gas at the facility.