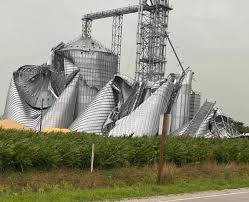 Iowa Gov. Kim Reynolds pushed back Friday against criticism that she has been slow to respond to a wind storm that devastated the state, and promised more help soon for tens of thousands of residents struggling through their fifth day without electricity.

She said she has commitments from the state’s largest utilities that customers in Cedar Rapids and other areas should have their power restored by Tuesday, if not sooner. Many others, including those in the Des Moines area, should be back online this weekend, she said.

Reynolds, a Republican, said she would submit the state’s request for a federal disaster declaration Monday after completing mandatory damage assessments. She said President Trump has promised to act swiftly to provide federal resources once that’s approved.

The storm known as a derecho swept through Iowa on Monday with winds of more than 100 mph, downing trees and power lines, destroying a third or more of the state’s corn fields, and damaging homes and businesses. At least three people in Iowa and one in Indiana were killed.

Cedar Rapids, the state’s second-largest city, has been hardest hit, with officials calling the devastation more widespread than a historic 2008 flood that wiped out downtown neighborhoods.

About 65,000 customers in the Cedar Rapids area remained without power Friday, and 100,000 more across the state. Alliant Energy said it anticipates replacing 2,500 damaged poles in a week — work that would normally take eight months.

Reynolds said the Iowa National Guard was not sent to Cedar Rapids earlier because the state did not receive a request for help from local officials until Thursday.

Iowa National Guard Adjutant General Benjamin Corell acknowledged that many residents had been asking about its absence this week but said the guard does not send in soldiers until its mission is clear. He said the guard’s focus was to coordinate with utilities to clear trees and restore power.

“We’re here. We’re ready to get going,” he said Friday. “We’re going to get this mess cleaned up.”

Several residents and a Democratic congresswoman who represents the area had criticized Reynolds for not moving faster.

Particularly blistering was a statement issued by the Retail, Wholesale and Department Store Union, which represents workers at major Cedar Rapids food manufacturing factories and said its members were “living in a war zone.”

“Too many Iowans are suffering and it is not acceptable that they are living without electricity, many are unable to go work, downed trees block roads for families to get badly needed essential supplies,” said union President Stuart Appelbaum. “It’s horrific.”

Reynolds said she did take action, including by issuing a state disaster declaration that provides some grants to low-income residents. She toured the area and spoke with Trump on Tuesday and Vice President Mike Pence on Wednesday during his campaign visit to Iowa.

“Everybody is doing the best they can,” Reynolds said at a news conference at a Cedar Rapids fire station.

Several residents said they were struggling to meet basic needs while already reeling from the coronavirus pandemic.

Ella Shears, 53, said the storm flooded her kitchen and bathroom and knocked out her power. She said she had to throw out $200 worth of food that was spoiled and doesn’t know when her next meal will come.

Shears said she cannot charge her cellphone, leaving her no way to communicate. Her third-floor apartment is hot, so she sits outside in the shade from trees that have not been knocked down.

Shears said the Wendy’s restaurant where she is a cashier has been closed. She is running out of prescription drugs she takes for heart problems, and worries about how she’ll get them refilled.

Eric Fish, 33, said he has been unable to cook a hot meal, eating peanut butter sandwiches for the last three days. He said the only help he’s received was from a city worker who helped knock down a big tree branch outside his home.

“No power for almost a week. Massive debris like everybody else. No help. We’re losing every bit of our food,” he said Friday.

Cecil Gott, 54, said his home suffered damage to windows, its roof and walls. He drove out of town to buy a chain saw that he has been using to help clear tree debris from his neighborhood.

“We really do need the Iowa National Guard out here,” he said. “If more people would come out to help, we would get our power back on sooner.”

Jeffrey Frajman, 66, said he and his neighbors in a low-income apartment complex are desperate for power to come back and for roads to be cleared.

“People are getting angry,” he said. “We need some action and we need it now.”

Iowa ‘hurting’ after storm, seeks nearly $4B in disaster aid