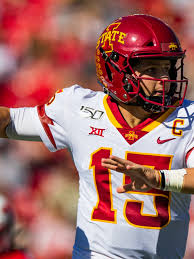 AMES, Iowa — It looks like Iowa State will have to cut two games from their schedule after the Big 12 announced Monday teams would play a “9+1” schedule.

That means the 2020 season will consist of nine conference football games and one non-conference home opponent.

The Cyclones recently announced Ball State would replace the Iowa Hawkeyes on their schedule. The Cy-Hawk game was canceled this year after the Big Ten announced it would only play conference football games this season.

It’s unclear which non-conference game will remain on the Cyclones schedule.

The Big 12 Board of Directors made the decision about the schedule on Monday night. A release on the conference’s website said they anticipate the start of the season to be sometime between mid-to-late September.

The conference also expects the Big 12 Championship to move back to December 12 or 19.

“I would like to salute the work of our university presidents and chancellors, athletics directors, coaches, medical advisors and administrators who have worked tirelessly and collaboratively during these extraordinary times,” sCommissioner Bob Bowlsby said in the release. “We believe this change provides the best opportunity going forward. However, we will undoubtedly need to be flexible as we progress through the season in order to combat the challenges that lie ahead.”