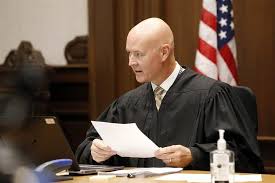 It’s the third county in Iowa to have the ballot request forms voided after Trump’s campaign and state and national Republican Party groups challenged county election officials who mailed the forms to voters with personal information filled in to simplify the process..

Judge Ian Thornhill sided with the Trump campaign in the Linn County case and Judge Patrick Tott similarly ruled in favor of the Republicans in a Woodbury County case. Those rulings voided about 64,000 requests for absentee ballots that had been submitted. Affected voters either have to fill out a new blank form to request an absentee ballot or vote at the polls on Election Day.

Thornhill filed his ruling in the Johnson County case on Saturday, again siding with the Republican groups and saying about 92,000 ballot requests sent to voters were invalid.

Officials in the three counties argued they pre-filled the forms to make it easier to vote by mail during the coronavirus pandemic.

About 15,000 of the pre-filled forms had been returned by last week in Johnson County.

Body of missing woman with Iowa ties found in Missouri