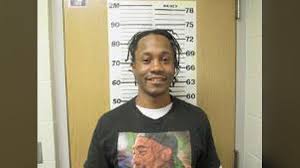 CEDAR RAPIDS — Police arrested a 24-year-old man Friday after it was determined that he was driving a stolen vehicle.

David Bryant III, of Cedar Rapids, was driving a 2015 Chevrolet Sonic that had been reported stolen when officers initiated a traffic stop just before 8 p.m. Oct. 23 at Higley Avenue and 19th Street SE, according to the Cedar Rapids Police Department.

The vehicle had been reported stolen Oct. 20, according to police. It had been parked in a lot near C Avenue and 14th Street NE. Police said there was no known connection between Bryant and the vehicle’s owner.

Police said Bryant told officers he had gotten the vehicle from another person.

Police said a search of the vehicle turned up a Milwaukee 12-volt impact driver that had been reported stolen out of Indiana, as well as several electronic items and bank cards that did not belong to Bryant.

A bag of methamphetamine and a pipe also were found in the vehicle, according to the police.