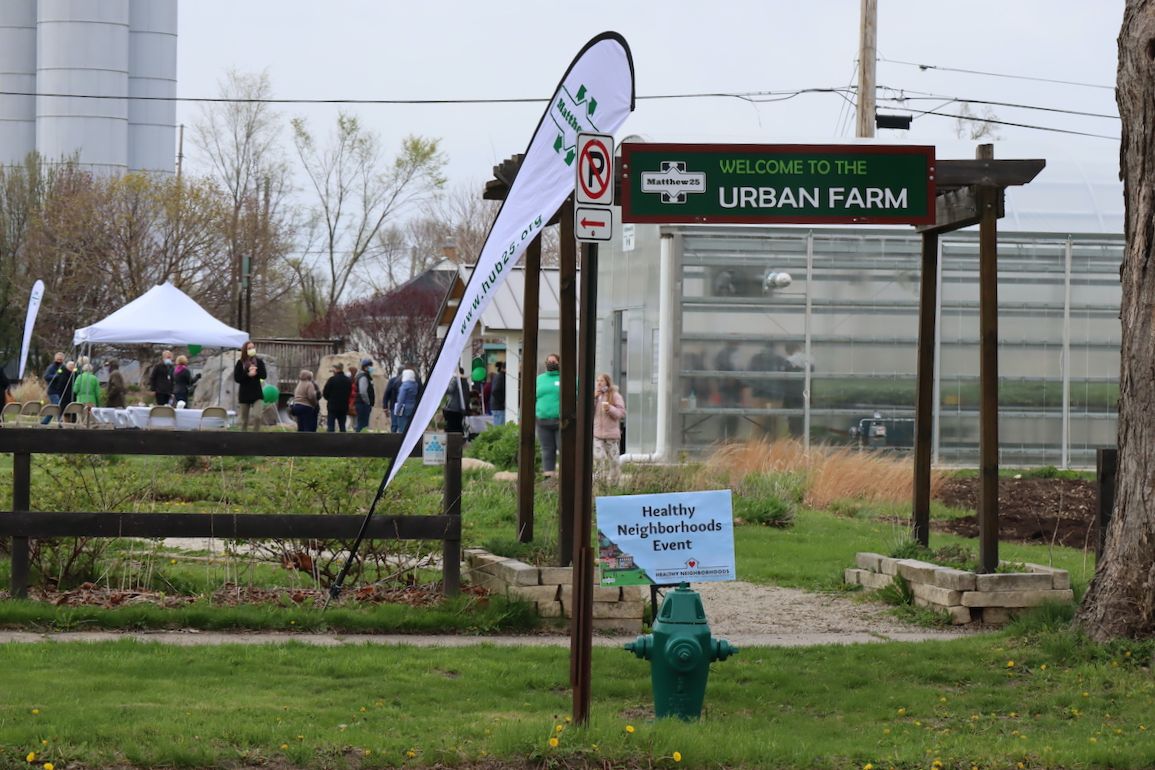 Cedar Rapids nonprofit Matthew 25 kicked off a $1 million campaign this week to revitalize the Time Check neighborhood with new housing opportunities and a nonprofit grocery store as the community continues to recover from the 2008 flood.

The remaining $600,000 will be used to open the Cultivate Hope Corner Store on the corner of Ellis Boulevard and E Avenue. The grocery store will turn the neighborhood from a “food desert into a food oasis,” Twedt-Ball said. The space will sell reduced-cost local produce, dry goods and other food staples. There will also be a small seating area in the store, as well as fresh, ready-to-eat meals.

The efforts are part of the Healthy Neighborhoods campaign, which Twedt-Ball said is about “pulling people together to rebuild an area.” The campaign has already raised nearly $800,000.

“We’re really here to talk about what an amazing neighborhood this is, the assets that it has of being near the river, near parks, right close to downtown and thinking about all of the ways that we can build on that to bring it back and to make it even better,” Twedt-Ball said on Tuesday during the campaign launch event at Cultivate Hope Urban Farm.

Matthew 25 was founded in 2006 with the goal of strengthening neighborhoods on the west side of Cedar Rapids. The organization has three focuses: food, housing and education.

The organization has also been active in helping residents recover from the 2008 flood and the August 2020 derecho. After the 2008 flood, the nonprofit worked with other organizations to invest more than $6 million in rebuilding 25 blocks and renewing those neighborhoods.

The nonprofit has been working with the Time Check neighborhood since the 2008 flood devastated the community. The Healthy Time Check initiative was started in 2018 to bring together stakeholders and partners to help with further investment in the neighborhood.

“Those of you that have been connected to this neighborhood for a while know that in 2008 it took a serious punch to the gut, and the floods of 2008 were devastating,” Twedt-Ball said, adding that the neighborhood “provides the lifeblood of Cedar Rapids.”

The neighborhood, which is located by the Cedar River, was established in the early 1870s. Many of the early residents were railroad workers, and the neighborhood’s name evolved from that. Northwest Neighbors Neighborhood Association President Al Pierson explained how the Time Check name came to be in a 2018 guest column for the Gazette:

“[T]he railroads were often short on payroll, and would regularly provide the workers postdated paychecks. Under credit arrangements with local banks, workers would be allowed to bank these checks in advance of noted dates to cover expenses, and the banks would delay the railroad’s obligation. These checks became known in local parlance as ‘time checks,’ and over time, the term grew to be used to describe the neighborhood as a whole.”

Twedt-Ball also mentioned the Quaker Oats company and Diamond V as part of the economic development in the neighborhood and how it has provided “the foundation for the success of Cedar Rapids.”

Mayor Brad Hart spoke at Tuesday’s event about the city’s efforts to strengthen the neighborhood with flood protection and housing development.

SanDee Skelton has lived in the Time Check neighborhood for almost all of her life. She’s raised her family here, her friends live here, she loves the community and is still deeply involved in it. Matthew 25 has “always been a help” in the neighborhood, Skelton said.

“New life is springing up every place that Matthew 25 has touched,” Skelton said. “… Let’s all do our part. Let’s all help this to be a healthy neighborhood and keep ourselves healthy and care for our neighbors like we did years back when I was a kid.”

The grocery store is scheduled to open by this fall and the first homes are scheduled for construction during this year’s building season, according to the nonprofit.

Information about how to donate to the campaign can be found online. If more than $1 million is raised, the money will be used to create a reserve fund for the store and develop more housing.