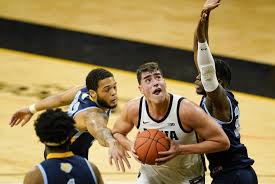 Garza was 14 of 15 from the field, making all three of his 3-point attempts, and was 10 of 12 on free throws for the Hawkeyes. He also had nine rebounds and three blocked shots in 29 minutes. It was 18th consecutive game of 20 or more points for Garza, the lone unanimous selection to the AP preseason All-America team.

Garza had 36 of his points in the first half, making all 12 of his field-goal attempts, and Iowa led 58-35 at halftime.

Garza’s perfect run ended when he missed a shot 28 seconds into the second half.