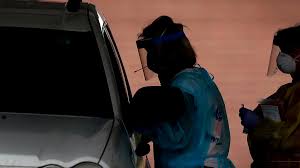 There were 677 new, confirmed cases in Iowa from 10 a.m. Sunday to 10 a.m. Monday, according to the state’s dashboard.

The state’s website says out of those who have tested positive, 87,984 have recovered. That’s an increase of 275 recoveries in the last 24 hours.

The state reported two additional deaths within this time frame, putting the state’s death toll to 1,636.

According to the state’s latest report, there are 561 Iowans hospitalized due to the virus, which is up from 541. This sets another record-breaking number for Iowa COVID hospitalizations. Of those hospitalizations, 129 are in the ICU and 45 are on ventilators.

As of 9 a.m. Monday, the Siouxland District Health Department reported 60 new COVID-19 cases in Woodbury County. This brings the county’s total number of positive cases up to 7,209.

The SDHD has reported one new virus-related death, bringing the county’s death toll to 97. Officials say this latest death involved an adult male between 18 and 40.

A total of 62 people are currently hospitalized with COVID-19 in Woodbury County. Thirty-five of those are county residents.

Buena Vista County, where Storm Lake is located, has had five new COVID-19 cases, bringing its total cases to 2,255. Of those cases, 1,985 of them have recovered.

Clay County, where Spencer is located, has reported three new virus cases, with its total now at 528. Of those cases, 329 have recovered.

Plymouth County has reported one additional virus-related death, bringing its death toll to 28.

As of Oct. 26, the state health department says Sioux County reported eight new cases bringing their total to 2,419. Officials say 1,690 of those cases have recovered.