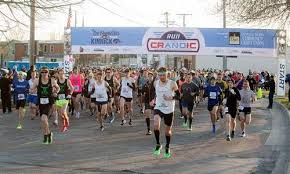 Throughout the day Saturday, Anna Deam, a sophomore cross-country runner at Jefferson High School was running alongside her father Chris.

“The first day she kind of wasn’t too into it and the next day she woke up and was all “gung-ho” and then I guess that sealed the deal,” Chris said.

At first, Anna was weary of about the plan her father had suggested to her. After all, the longest Chris or Anna had ever run until Saturday was around 7 or 8 miles. The new plan was to go 26.2, a full-length marathon, but not all at one time.

“You get to eat food, rest, and get hydration like people who are just running it straight wouldn’t really get,” Anna said. “So it’s kind of easier this way,”

At the top of every hour, the pair get their quick stretch in and then run exactly one mile around the neighborhood. 26 hours later, their goal will be complete.

“We’re going to get stuff done off the task list that has been there for a long time,” Chris said.

In the 45 minutes in between runs, Chris and Anna go one by one knocking off items off their to-do list.

“I’m going to make some recipes that I really wanted to try, put some new batteries in a clock that hasn’t run in forever,” Anna said.

“Squeaky doors that have been squeaking forever and every time I open it I think man I should take five minutes and fix that,” Chris said.

Once the clock hits double zeros again, its time to get the heart back pumping.

“If you didn’t have those things to do you’d run your mile, maybe stretch and sit down and then 45-50 minutes later you get up to go run again. just might be more strain on your muscles.” Chris said.

Based on when they started running Saturday morning, they are scheduled to finish the 26.2 mile run around 8 a.m. Sunday morning.