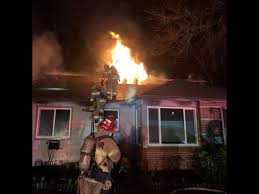 CHARLES CITY, Iowa — One person is dead after fire broke out at a home in northeastern Iowa.

The Charles City Fire Department said the blaze was reported about 2:20 a.m. Saturday. Arriving firefighters found heavy smoke and determined the fire was confined to the kitchen area.

The victim, whose name was not released, was found during a search of the home. Fire officials say the victim was alone in the home.

An investigation determined that the fire was likely caused by cooking materials overheating.