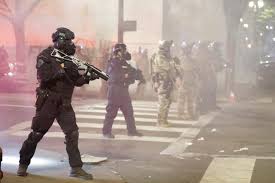 PORTLAND, Ore.  – Oregon’s governor says federal agents who have clashed with protesters in the state’s largest city will begin what she called a “phased withdrawal.”

Acting Homeland Security Secretary Chad Wolf said in a statement the plan includes what he called a “robust presence” of Oregon State Police in downtown Portland.

Protests have roiled the city for more than two months since the killing of George Floyd at the hands of Minneapolis police.

Like many other protests, they sought to highlight and call for an end to racial injustice. They increasingly focused on federal property even before the U.S. agents arrived

US health officials believe 20M Americans have had virus