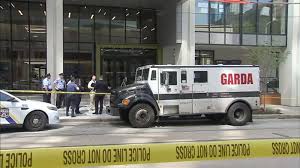 Police say a man who was among a group of people trying to rob an armored vehicle outside of an Iowa bank was wounded in a shootout with the armored truck guards.

The shooting happened Wednesday morning outside a Waterloo U.S. Bank branch in northeastern Iowa. Police and medics who arrived on the scene found a man with gunshot wounds who was taken to a hospital with serious injuries.

His name has not been released.

Police say an initial investigation showed that people in a vehicle tried to rob the armored car in the bank’s parking lot when the shootout began.

Police later located the vehicle they believed was used in the attempted robbery. No arrests have been reported.