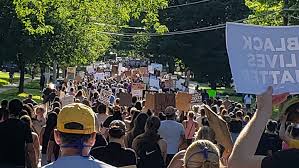 “Happy Juneteenth,” the crowd of about 150 people chanted on Friday as they marched from Cedar Rapids City Hall to the African American Museum of Iowa in light rain. June 19 — Juneteenth — is the anniversary of the day in 1865 when the news that slavery had been abolished reached formerly enslaved people in Texas.

Friday’s event was the third one this month organized by the grassroots group Advocates for Social Justice. About an hour before it began, the group posted an update on Facebook saying it would be a “celebratory march rather than a protest.”

There was free food, and various tents were set up outside the museum. In addition to a tent where people could register to vote — voter registration tables were set up at the previous two events, both of which stressed the importance of voting — there were also stations set up that highlighted work from black artists and business owners.

Earlier that day, the Cedar Rapids City Council held a special council meeting via Zoom to discuss the seven demands the grassroots group has been calling for. Organizers have been meeting with city officials for about two weeks, and they set Juneteenth as the deadline to hear from city councilmembers on whether or not they support each of the seven demands.

“Cedar Rapids council wants our community to know that we as a council — along with our city manager, our police department and the entire city team — are united and fully committed to addressing the list of priorities provided by citizens involved in the Black Lives Matter movement,” Mayor Brad Hart said at the start of the meeting.