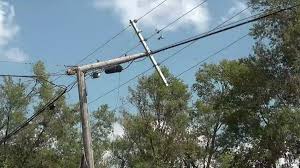 Months after a derecho tore through Iowa, thousands of streetlights still need to be repaired in the Cedar Rapids area.

Mayuri Farlinger, the director of operations for Alliant Energy in the region, did not have an estimate as to how long it might take, The Gazette reported.

The utility prioritized restoring power to homes and businesses after the Aug. 10 derecho.

Streetlight repairs began at the end of October and crews have been out in “full force” to repair them, he said. The company’s crews and contractors have fixed hundreds of streetlights.

“That will continue until every single one of those lights are back on,” Farlinger said.

Alliant has 12 two-person crews dedicated for streetlight repairs in “every quadrant of the city.”

Fewer daylight hours and colder weather has not affected the workers’ ability to repair lights.

“If it’s negative 20 degrees, they’re not going to be working outside that day,” Farlinger said. “But we should be able to get a good chunk, if not all of this work done before the weather turns really bad.”

The level of damage has varied between neighborhoods, with some areas having half of the lights out. Some streetlights need to be completely replaced, while others can be restored by fixing a span of wire.

Alliant is also dedicating many of its crews to restoring power to customers who needed extensive electrical repairs before Alliant could resume power.