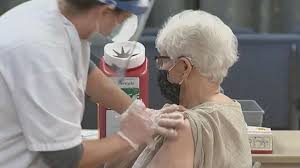 SEATTLE  – A rare winter storm that dumped a foot of snow on Seattle couldn’t keep a 90-year-old woman from her first appointment for the coronavirus vaccine.

The Seattle Times reports that Fran Goldman walked six miles round trip to get her shot.

“I have been calling to get an appointment anywhere, every morning, every afternoon and often I’ve been online at night,” Goldman said.

She finally secured a slot for Sunday morning, but Friday and Saturday a strong winter storm moved through the region, turning the city’s normally rainy streets into a winter scene of snowdrifts.

Goldman dressed in fleece pants and a short-sleeved shirt so that the nurse could get to her arm easily. Over that, she layered a fleece zip-up, then a down coat, then a rain jacket.

She then put on snow boots, took out her walking sticks and ventured onto the snowy streets.

“It was not easy going, it was challenging,” she told the newspaper.

But Goldman made it to her appointment, just five minutes late.

Her daughter Ruth Goldman, who lives in Buffalo, New York, wasn’t surprised by her mother’s actions.

“We’re outside people,” she said. “We love being outside. I was out yesterday at Lake Ontario with a wind chill of 6 degrees.”