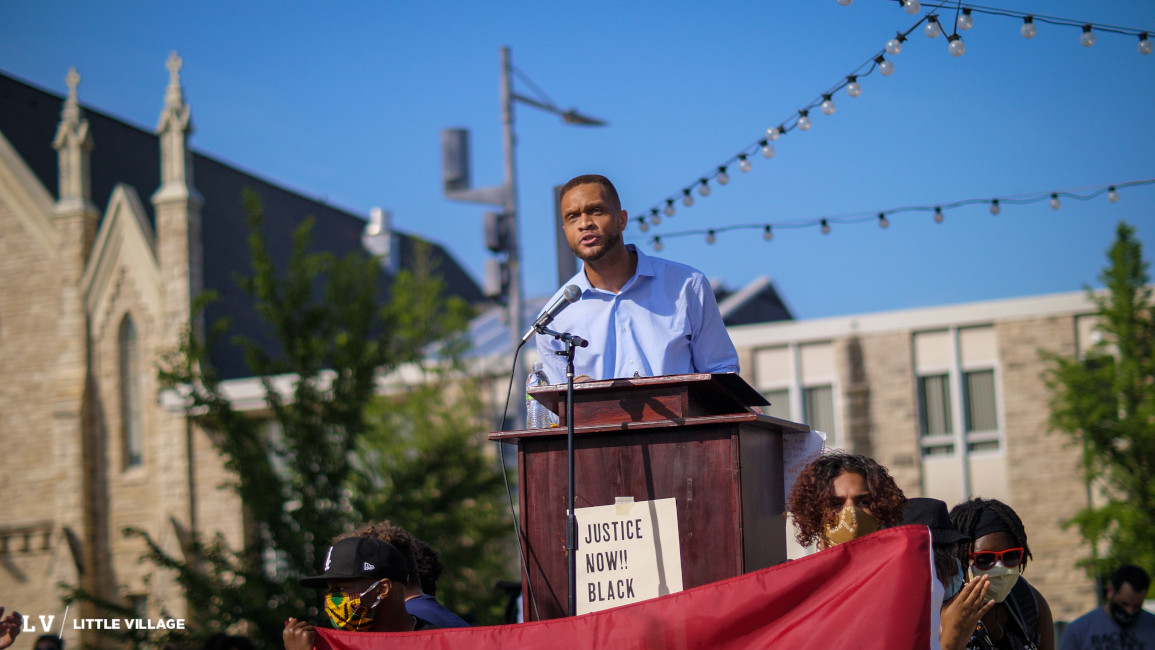 Linn County Supervisor Stacey Walker told a crowd of more than 2,000 at Greene Square Park in downtown Cedar Rapids on June 6 to “understand the largeness of this moment” and that they are “part of a movement — a part of living history.”

The protest in Cedar Rapids against police violence and racism was one of many across the world following the killing of George Floyd by Minneapolis police officers on May 25. There were protests in all 50 states and in other countries, including France, Brazil and Denmark.

“It’s no secret that extrajudicial killings of African Americans have been happening in this country since its founding,” Walker said in an interview with Little Village on June 17. “But obviously, after George Floyd was murdered, it sparked a movement, and people from Dublin to Tokyo, from Paris, France to Australia, they were marching in the streets in solidarity with African Americans.”

States, including Iowa, have introduced or passed bills addressing policing. Grassroots groups, including in Iowa City and Cedar Rapids, have been leading protests to demand change from their local officials.“This is something that has never happened before in the history of the world, even during the civil rights movements in the ’50s and ’60s. You had African Americans in this country and their allies in this country agitating for change, but their cause was never taken up by the rest of the developed world. And so I think seeing those images of people from around the world [and] seeing Cedar Rapids, a town that has a checkered history with civil rights, come together in the way that it did, it became clear to me that this was historic.”

Despite the actions taken, advocates and elected officials say this is just the beginning.

Little Village sat down with Walker to discuss the protests in Cedar Rapids, marijuana decriminalization, his views on police reform and his career as an elected official in Iowa.

The grassroots group Advocates for Social Justice has organized three protests in Cedar Rapids during June, with the most recent protest happening on Juneteenth. The group has also been meeting with city officials to discuss their seven demands for change.

During a special Cedar Rapids City Council meeting on June 19, just a few hours before the Juneteenth protest, the councilmembers unanimously voted in favor of a resolution supporting the seven demands. A week before that, Cedar Rapids Police Chief Wayne Jerman announced that the city is moving forward with establishing an independent citizens review board, which is one of the seven demands.

The negotiations between protesters and city leaders “is yet another example of the power of grassroots activists and organizers,” Walker said.

“It is surprising to me that this community and other communities here in Iowa and quite frankly around the country have so energetically and enthusiastically taken up the cause of systemic oppression being perpetrated against African Americans in this country,” Walker said.

“These issues have never ranked really high in the minds of our community leaders. They have never been priorities, and therefore, have never really touched the lives of so many of our residents here in Linn County and Cedar Rapids. So to see the energy, to see the enthusiasm, to see the large numbers of people that came together was both surprising and inspiring.”

During the negotiation meetings, which Walker was present at, he said he was “taken aback” at the reluctance and obstacles by some of the city council members.

“It’s a rather interesting situation insofar as it appears to me that our law enforcement agencies, namely the Cedar Rapids Police Department and the Linn County Sheriff’s Office, seem ready for change, seem open and amenable to it more so than our elected city councilors,” Walker said. “I think a lot of the organizers on the ground here were quite surprised by that.”

Prior to the pandemic, Walker was working with Linn County Sheriff Brian Gardner and other officials on how to improve policing and address racial disparities with the criminal justice system.

One of the ways to begin addressing some of these issues, Walker said, is by “essentially decriminalizing marijuana offenses and other low-level offenses” or at least issuing a citation instead of jail time. The Advocates for Social Justice have asked the Cedar Rapids City Council to decriminalize marijuana and other low-level offenses as part of their seven demands.

Iowa has some of the worst racial disparities for marijuana arrests in the country, an ACLU report found earlier this year. A black person in Iowa is 7.26 times more likely to be arrested than someone who is white.

That disparity is even larger in Linn County, where someone who is black is 9.65 times more likely to be arrested.

“So we were on the brink of getting that program off the ground,” Walker said. “There are similar programs that exist around the country. We were examining a model that began in Seattle and has since sort of been stood up in other cities around the country, and we were to the point where we had identified our costs. … And it was like that — COVID hit and changed everything for the world.”

“We weren’t able to get that program off the ground, but given the renewed global interest in what I’m calling the Black Lives Matter liberation movement, I think those conversations will be very ripe, and we’ll see other folks in the room move with a greater sense of urgency to see to it, that it comes to fruition.”

On June 22, the Des Moines City Council unanimously agreed to create a task force to study marijuana decriminalization. The task force will provide recommendations on potential city and state action by Oct. 1.

But even in states and cities that have decriminalized or legalized marijuana, racial disparities remain despite fewer people being arrested.

He mentioned how most of his white professional friends use marijuana without ever thinking they will face legal consequences.

“We have developed a system in America that has obviously played itself out here in Iowa and elsewhere — Wisconsin. In fact, the Midwest seems to have the greatest disparities around the country. But we’ve developed a system over time that over-criminalizes people based on their race, based on their economic station. We know people with older vehicles get pulled over at higher rates than people with newer, nicer vehicles. We’ve just created a system that over-criminalizes, again, people by their race and by their economic situation. That is not right. It is not fair. It’s an aberration of justice. And there are so many consequences that stem from that when you get into the criminal legal system. It impacts your life greatly.”

Advocates across the country have been calling for defunding or abolishing police departments following the killing of George Floyd. Supporters of defunding seek to cut the spending of police forces, whereas the abolition movement calls for public safety tactics that are different from a traditional police force.

The Minneapolis City Council voted this month to dismantle the city’s police department and create a new system of public safety. In Iowa City, the city council is working on a plan to restructure the Iowa City Police Department toward community policing.

Walker said he is in favor of the movement to defund police departments.

“I certainly believe, unequivocally, we need to stop pumping money into an already bloated law enforcement apparatus, which everyone now can see as clear as day is not very effective, and does not serve the interests of the community in an effective manner and can even be a flat-out danger to people of color in this country,” Walker said.

One division would be armed with nonlethal weapons and have advanced training in fields such as mental health, de-escalation and public health. The second division would be smaller and comprised of a highly trained armed response unit that would be dispatched in violent situations but would not make first contact with citizens.Going further than that, Walker said he thinks law enforcement should be redesigned to include two divisions.

There have been countless conversations about how to repair or rebuild trust between communities of color and law enforcement. But Walker said the question isn’t about repairing or rebuilding, because that trust was never there. It’s about starting from the beginning and developing a relationship.

“The relationship wasn’t founded on trust — it was founded on an improper, unreasonable, unacceptable power imbalance where law enforcement was basically doing the bidding of slave owners.”

“I’m trying to get to a country where if I have kids one day, they can be unafraid to go about their business in society. They can be unafraid of being stopped by a police officer and potentially losing their life. And I think we take a step in that direction when we rethink public safety in that manner.”

In late May, Walker published a post on Bleeding Heartland in which he discussed being an outspoken elected official in Iowa. Walker began the post by talking about how the shooting of Jerime Mitchell changed him, and he became aware of this change during a Facebook Live conversation with Kimberly Graham.

Mitchell was shot by former Cedar Rapids Police Officer Lucas Jones following a traffic stop in November 2016. Mitchell is paralyzed from the neck down as a result of the shooting. Jones was fired from CRPD on June 18.

“As I mentioned in that post, I realized my transformation as a person, as a public servant, I realized it in real-time,” Walker said.

“I knew that I had a propensity to speak up, and every issue after issue that I would stick my neck out for on behalf of, I was growing more upset, receiving text messages from other elected officials around the state who would say ‘I’m glad you’re taking a position on it. I think you’re right. Stay encouraged.’ I became upset because I was the one taking the arrows and getting the angry emails from residents and having other party leaders wonder about my future viability as a political leader in this state because I would be speaking up. I was upset that they wouldn’t say those things publicly, that they would stand by me in silence but couldn’t find the courage to do it publicly.”

Walker, a Democrat, said he gave up on the idea of climbing the ranks in Iowa politics, and that he had received a number of phone calls from state leaders and political consultants telling him to stop doing what he was doing.

“Over the years, I’d received enough phone calls from people here in the state, leaders in the party here in the state and consultants that work with politicians from around the country … who essentially would say to me, ‘Hey, man, you’re becoming radioactive. And if you want a future in this party, you’ll keep your mouth shut on issues of race, you won’t support Bernie Sanders’ — that’s a call I received several times — ‘and you will basically support these other elected officials who we have deemed the leaders of the party, and you won’t criticize them.’”

“As a young guy entering politics, as a young African American in this state entering politics, that was tough for me.”“These are the things I was hearing and so I just accepted that if I couldn’t live with myself, being that kind of politician I think I use the words careful, calculating, virtue-signaling. If I couldn’t accept living like that, then I had to accept the consequences.”

Despite the challenges, Walker said he has no regrets about deciding to be this type of politician and criticizing other politicians for not speaking up, even if they are in his party.

“I hope that what comes after me in this state, particularly in the Democratic Party, is another generation of young elected officials who will understand that you can be successful, you can be effective, all while keeping your conviction and holding people to account. I hope that’s the case. I hope that’s part of my legacy.”