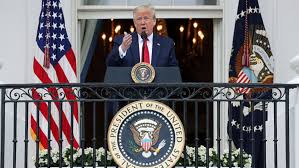 WASHINGTON — President Donald Trump says he’s given the order for National Guard troops to begin withdrawing from the nation’s capital, saying everything now is “under perfect control.”

The District of Columbia government requested some Guard forces last week to assist law enforcement with managing protests after the death of George Floyd. But Trump ordered thousands more troops and federal law enforcement to the city to “dominate” the streets after some instances of looting and violence.

Trump tweeted Sunday that “They will be going home, but can quickly return, if needed.” He also ordered more than 1,000 active duty troops to be flown to the D.C.-area in reserve, but they have begun returning to their home bases after days of peaceful protests.

Dozens of National Guard troops from South Carolina were seen checking out of their Washington, D.C., hotel shortly before Trump tweeted he was giving the order to withdraw guard forces from the capital.

The troops sipped coffee from an adjacent Starbucks and smoked cigarettes Sunday morning as they awaited buses to take them to the airport for a flight home.