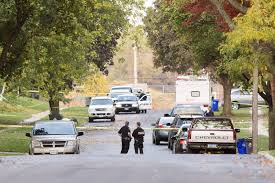 [UPDATED 5/1 4:20 p.m.] Cedar Rapids Police have released the name of the woman killed in a morning shooting, as well as the man arrested in her murder.

25-year-old Asia T. Grice is the woman who was pronounced dead at the scene early this morning. We’ve also learned that she was pregnant.

The other woman shot, also 25, has not been identified. Her injuries were non-life threatening.

Osborne is being held at the Linn County Jail in Cedar Rapids.

[ORIGINAL STORY] One woman is dead, another injured, and a man has been arrested after an overnight shooting on Cedar Rapids’ northwest side.

According to a media release from the Cedar Rapids Police Department, officers were dispatched to 1610 30th St. NW, Apartment 11, at 4:39 a.m. this morning on a report of shots fired. When they arrived, officers found two adult women suffering from gunshot wounds.

One woman was pronounced dead at the scene. She has not been identified, pending notification of relatives. The other woman, who has also not been identified, was taken by Area Ambulance Service to a Cedar Rapids hospital. Her injuries are considered non-life threatening.

Cedar Rapids Police were able to determine the event was a targeted attack and at 7:19 this morning, they arrested an adult male suspect in the case at the Rodeway Inn at 4011 16th Ave. S.W. He has not been identified.

We’ll update this story as more information is released. The investigation in the case continues.

Cedar Rapids Is in Need of Cloth Masks