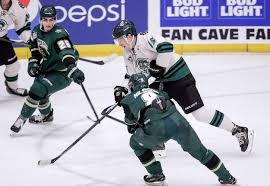 There still is a part of all of them that remains in Cedar Rapids.

Kids like Max Sasson, Justin Hryckowian and Bennett Zmolek are playing elsewhere this season in the United States Hockey League. They had no choice.

The derecho that blasted the city in August made the ImOn Ice Arena uninhabitable. Multi-million dollar repairs are ongoing.

Because of that, the Cedar Rapids RoughRiders announced early in the fall they had to opt out of the 2020-21 season. Much like their rink, they would rebuild and come back next season.

Their players were made available via a league dispersal draft. Sasson is with the rival Waterloo Black Hawks now, Hryckowian the Sioux City Musketeers and Zmolek the Youngstown Phantoms.

One of his teammates is Nate Hanley, also a teammate in Cedar Rapids. Fourteen 2019-20 RoughRiders aren’t RoughRiders this season.

Though in a weird way, they still are. They have a bond, and it’s a strong one.

“Our group chat goes pretty much all day still,” Sasson said. ”We had a pretty tight team both of my years there. That the team I was on last year and year before still talks just speaks to the culture you have in Cedar Rapids. A lot of kids I know never talk to their old teammates … The guys are keeping in touch.”

It’s part “how are you doing?,” part smack talk.

“Yeah, our old group chat from last year is always getting fired up,” Hryckowian said. “People making jokes about going up against each other. Me and Sass have gone at it a good amount of times already this year. We’ve played each other four times, so it’s classic to line up for a faceoff against him.

“Good times against my old teammates.”