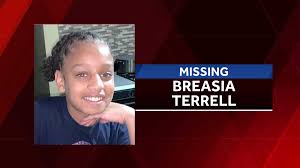 An Amber Alert has been issued for a 10-year-old Davenport girl who has now been missing for five days.

Breasia Terrell was last seen early last Friday morning, July 10 in the 2700 block of East 53rd Street in Davenport, according to the Davenport Police Department.

The F.B.I. and the National Center for Missing and Exploited Children were already involved in the case, according to WQAD, before the Amber Alert was issued just after midnight this morning.

47-year-old Henry E. Dinkins of Davenport was described as a “person of interest” in the case during a Tuesday afternoon press conference. Dinkins was taken into custody last Friday night, on a sex offender registry violation. Authorities are trying to determine where Dinkins was last Thursday night from about 10 p.m. to approximately noon on Friday, July 10.

The Iowa Amber Alert website describes Breasia Terrell as four-feet five-inches tall with black hair and brown eyes. She weighs 75 pounds. At the time of her disappearance, she was wearing an oversized white t-shirt, shorts, and either white or pink flipflops. It is believed that she is somewhere between Clinton and Davenport. WQAD reports Davenport police say Dinkins has connections to both Camanche and Clinton.

Anyone with information on Breasia Terrell’s disappearance should contact Davenport police at 563-326-6125 or 911.