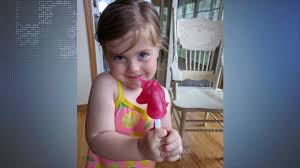 The Gazette is reporting that a three-year-old girl who was found face down in a swimming pool last week has died. The State Medical Examiner’s Office reported that Hallie Kraft was pronounced brain dead at 9:30 p.m. on Sunday night. She had been on life support for almost one week.

Hallie’s mother, Candace Kraft, announced via a Facebook post on Monday that the family would be donating her organs.

The Gazette reports that emergency responders were sent to the 7500 block of Normandy Drive NE at around 8:30 p.m. on June 29. Public Safety spokesperson Greg Buelow said that when they arrived, a neighbor who is a healthcare provider was performing life-saving measures on the toddler.

The child was transported to a hospital in Cedar Rapids, and then to the University of Iowa Hospitals and Clinics. Buelow said that the family had been gathered around a fire pit and that the child had wandered off. The child was found face down in the pool. Officials believe that she climbed the ladder on the side of the pool and fell forward.

Statistics show that drowning is the number one cause of death in children ages 1 to 4. Experts say you should always make sure that young children have the proper amount of supervision. Drowning can happen in a matter of seconds. Never assume someone else is watching the child. All parents and childcare providers should learn CPR. Avoid alcohol when you are boating, swimming, or supervising children who are swimming. If you have a pool at your home, make sure it is fenced in and install alarms that sound when someone enters the pool.