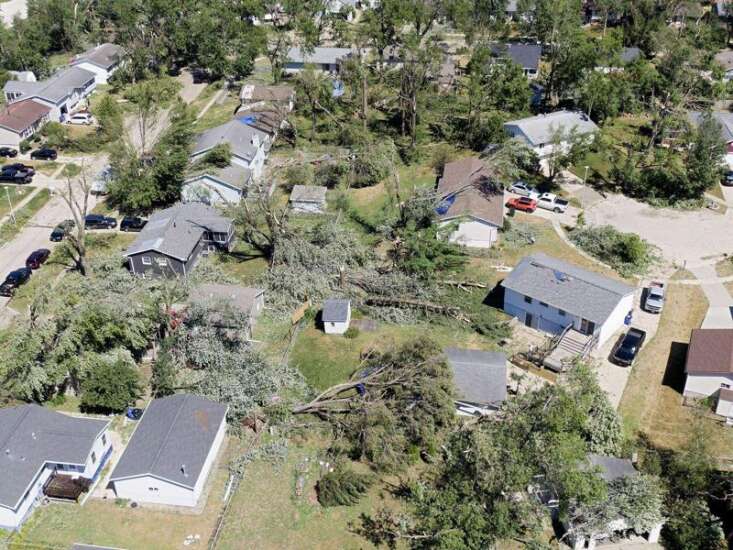 CEDAR RAPIDS, Iowa – Roland Perske II walked around his Wellington Heights home Friday, which was riddled with damage from the August 10 derecho.

The roof was still damaged, his chimney was broken, and a tree still needed to be taken down by the city. Perske said he has a roofing company but still needed to get a general contractor.

“The roofing company said they couldn’t do anything until a contractor looked at it,” Perske said.

Cedar Rapids workers have been walking around vulnerable neighborhoods and knocking on doors. The hope was to learn what challenges people faced among those who didn’t have internet access, are elderly, or are impoverished.

“We know that the resources were advertised, but we want to make sure that folks had the opportunity to talk with somebody who might be able to steer them in the right direction,” Jeff Wozencraft, Cedar Rapids city planner, said.

Wozencraft said they had already knocked on 250 doors and planned to keep the effort up until mid-June. Volunteers were now being asked to give the city a hand.

“We don’t want people to fall through a gap,” Wozencraft said. “We saw folks talking with insurance companies and trying to figure out what kind of claim they received. People weren’t sure if they were getting the amount of money needed to make a full repair.”

Perske said people in his neighborhood needed the help. He said piles of debris were still around, stumps needed to be ground, and trees cut down.

“I wish they would help fix my chimney,” Perske said.

SpaceX’s Starlink satellites spotted in the skies over eastern Iowa