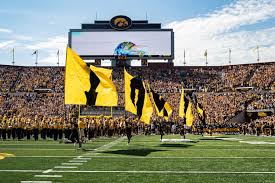 IOWA CITY, Iowa — The Iowa Hawkeyes now know who they will play in football this fall.

The Big Ten announced earlier this week they were reversing course and playing football in 2020.

Last month, the conference initially decided to not play due to the coronavirus pandemic.

The Hawkeyes start the season on the road against the Purdue Boilermakers.

First half of Iowa’s 2020 schedule
Related Topics:
Up Next

Backers pledge $1.65M in push to save Iowa sports programs