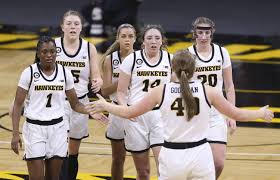 COLLEGE PARK, Maryland — The Iowa women’s basketball game Thursday against Maryland has been postponed out of caution due to Wednesday’s inauguration activities in Washington, D.C.

Two weeks ago, a mob of pro-Trump supporters stormed the U.S. Capitol Building, resulting in the death of five people, including a police officer.

Maryland’s campus in College Park is only about 12 miles from Capitol Hill.

The two schools will work to reschedule the game. The Hawkeyes game against Rutgers had to be postponed due to COVID-19 issues with the Scarlet Knights.

The Hawkeyes next scheduled game is on Thursday, Jan. 28 against Northwestern inside Carver-Hawkeye Arena.

Offense lets Iowa down in stunning loss to Indiana