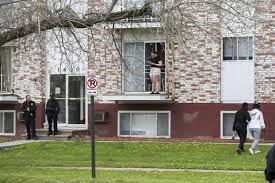 The Linn County Attorney’s Office has ruled that the shooting death of a man at a mobile home park in Hiawatha was an incident of self-defense by three other men.

During the shooting on May 30, 2020, Joshua Lathrop, 31, was shot and killed at Sunset Village Mobile Home Park.

Investigators say they found Lathrop was the initial aggressor during a confrontation with three men – Terrone Bell, Truman Harris and Chad Harris.

The men voluntarily spoke with investigators and claimed the fired their weapons to defend themselves or someone else.

The attorney’s office said all three men had handguns and 25 shots total were fired.

According to Iowa law on self-defense, a person may use deadly force if it is reasonable to believe that force is necessary to avoid injury or risk to one’s life or the life or safety of another person.

The attorney’s office said charges will not be filed in Lathrop’s death because investigators could not prove, beyond a reasonable doubt, that the three men did not act in self-defense