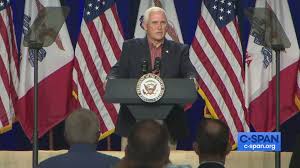 It’s been announced, according to Iowa’s News Now, that the vice president of the United States, Mike Pence, will be in the Hawkeye State on Tuesday, June 16.

It’s reportedly set to be a short visit to Winnebago Industries, with a tour of the facilities in Forest City as well as a lunch with Iowa Governor Kim Reynolds. He will reportedly make remarks to employees at Winnebago and it’s not known if any other current phot-button topics will be discussed before he makes his return to Washington, D.C.

This will be Pence’s first visit to Iowa since May, when he was in West Des Moines for a roundtable discussion with Hy-Vee where he discussed, among other topics, the plan to allow the reopening and resumption of religious services at that time.

Winnebago was shut down for at least two weeks during the pandemic. It is possible their recovery from that shutdown and any issues facing their company and employees since they will be discussed at the tour, but there is no official word from the Vice President’s office at this time.

Further details are said to be released regarding Pence’s visit before Tuesday. We will have more news on the visit as details arise.