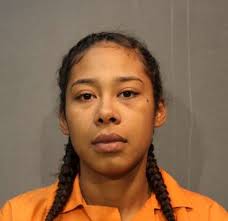 SIOUX CITY, Iowa – A woman has been sentenced to 50 years in prison for fatally stabbing another woman in April 2018 in Sioux City.

Camargo-Flores was originally charged with first-degree murder but pleaded guilty in October to the lesser charge.

The reason for the stabbing wasn’t made clear Thursday but police said Camargo-Flores told them she had been involved with Alvarez-Flores’ boyfriend.

The two women were not related.