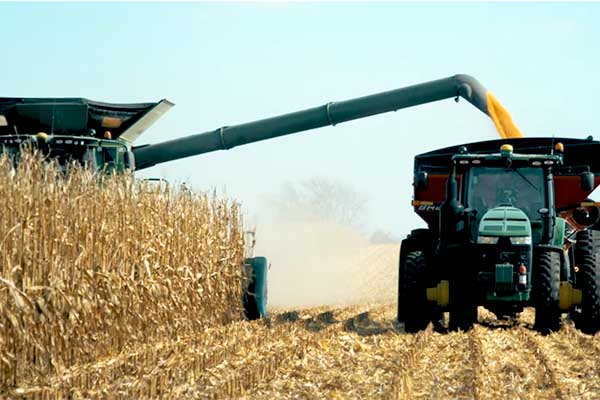 The U.S. stock market is weaker with the Dow down 150. The dollar index is 5 higher. Interest rate products are firmer. Energies are weaker with crude down $0.60. Livestock trade is higher. Precious metals are mixed with gold down $12.50.

Corn trade is 7 to 8 cents lower at midday with broad commodity risk off trade this a.m. encouraging selling while spread trade remains mostly steady. Ethanol margins will remain poor with soft demand, and with limited relief in the cash market short term with the weekly report showing production 4,000 barrels per day higher, and stocks down 64,000 barrels.

Basis has remained fairly sideways. Weekly export sales were strong again at 1.44 million metric tons. On the March contract, support was the gap area at $5.17, which we are trading just below at midday and bounced from with the 20-day at $4.96 below that, with the next level up the contract high at $5.41 1/2.

Soybeans are 21 to 23 cents lower at midday with trade testing support levels as spread trade weakens despite fresh export sales of 136,000 metric tons to China again today. Meal is $5.50 to $6.50 lower and oil is 55 to 65 points lower.

Basis will likely remain flat with crush likely to take precedence over shipping in coming weeks with crush margins narrowing overall and new crop seeing more interest in recent export bookings. Brazil should catch rains short term with very early harvest underway, with Argentina action mixed. Weekly export sales were very strong at 1.82 million metric tons of old crop, 831,000 of new crop, meal was 468,500 metric tons, and oil 52,300. The March chart has support at the 20-day moving average of $13.46 which we have tested so far with resistance the old support area around $13.85.

Wheat trade is 12 to 16 cents lower at midday with trade following the lead of the row crops so far, with Chicago seeing the most pressure so far with intramonth spreads relaxing. The dollar remains above 90 on the index with light buying in risk off trade. The Plains are expected to see limited moisture with cold scares remaining limited for now. Kansas City is at 21-cent discount to Chicago with the pattern of narrower overnight trade continuing, with Minneapolis at -21 as well. Weekly export sales remain a bit soft at 329,600 metric tons. Kansas City March chart support is the 20-day at $6.10, and resistance is the upper Bollinger Band at $6.51.