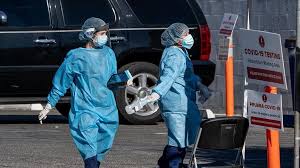 DENVER – The first reported U.S. case of the COVID-19 variant that’s been seen in the United Kingdom has been discovered in Colorado.

Gov. Jared Polis and state health officials announced Tuesday that the case was found in a man in his 20s who’s in isolation and has no travel history.

Colorado health officials say the vaccines being given now are thought to be effective against this variant.

Public health officials are investigating other potential cases and doing contract tracing to determine the variant’s spread in Colorado.