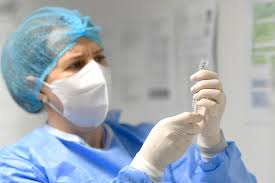 America exceeded that mark on Sunday, just six days after it reached 18 million. The nation’s case numbers have more than doubled in less than two months.

COVID-19 deaths in the U.S. also have been rising, and now total more than 332,000. That’s more than one death for every 1,000 Americans. The U.S. population as of Saturday was about 331 million, according to the U.S. Census Bureau.

The United States accounts for about 4% of the world’s population, but close to 24% of its total coronavirus cases and 19% of its COVID-19 deaths. Health experts believe many cases have gone unreported, however, both in America and internationally.

Worldwide there have been nearly 81 million confirmed COVID-19 cases.

Health officials are concerned about future cases brought on by travel and gatherings during the holidays and New Year’s.

Dr. Anthony Fauci said Sunday the U.S. is at a critical phase of the pandemic, with the worst probably still ahead. He predicted the general population would be getting immunized widely by late March or early April — beyond the front-line workers, older people and certain other segments of the public given priority for the vaccines.

For most people, the new coronavirus causes mild or moderate symptoms. For some, especially older adults and people with existing health problems, it can cause more severe illness, including pneumonia and death.

First reported US case of COVID-19 variant found in Colorado

Pfizer to supply US with additional 100M vaccines doses