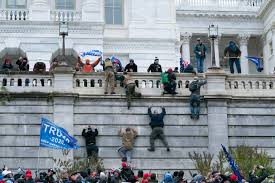 DES MOINES, Iowa — A mother and son from central Iowa have now been arrested in connection to the attack on the U.S. Capitol on January 6.

On Friday, Deborah Sandoval, of Des Moines, and Salvador Sandoval Jr., of Ankeny, were both arrested on federal warrants by special agents from the FBI Omaha Field Office’s Des Moines Resident Agency.

Deborah Sandoval is charged with:

Salvador Sandoval Jr. is charge with

Both suspect made their initial appearance in federal court Friday.

At least two other Iowans have been charged with crimes for their actions at the U.S. Capitol on January 6.

Leo Kelly, a Cedar Rapids man, was arrested for participating in the events. New court documents revealed more details from his case on Thursday.

Jensen was seen in video wearing a QAnon shirt and confronting a Capitol police officer.

Man Gets 3 Years for Driving Truck Toward BLM Protestors